Hidden Disney in the Friendliest.app

When asked why I love Disneyland so much, the first thing I mention is all the little details and touches throughout the park. All of those teeny bits of magic that are sprinkled around and packed into the nooks and crannies. From Patrick Begorra's home in Adventureland to the Main Street windows to the telegraph in New Orleans Square continuously tapping out Walt Disney's opening day speech, there are surprises everywhere just waiting to be uncovered.

We wanted to bring that same spirit of exploration and discovery to the Friendliest.app. We've hidden (and not-so-hidden) a multitude of Disney and Disneyland references, Easter eggs and homages through the application. Here are a few of them, but there are many more if you take the time to explore...

The Friendliest.app logo is an homage to the Disneyland marquee sign that sat near the park entrance from 1958-1989. Though the sign was replaced long before my first visit, a childhood watching The Wonderful World of Disney and Disneyland commercials will forever associate that image with the park.

For our logo, we chose a stripped down version of the park sign, specifically the large yellow, blue, pink, green and orange rectangles that sat behind the letters. We also tried to preserve the shape and spacing of these blocks.

The five color of our logo also make up the base palette we use throughout the application. 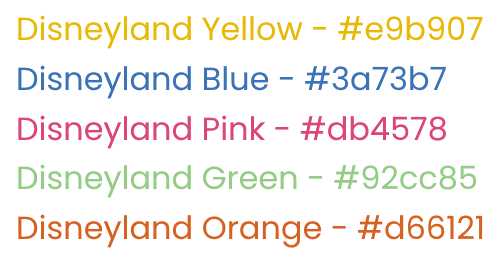 The Friendliest.app uses two primary fonts, Oswald for headers and Poppins for all other text. They were selected because of their Disney-related names (and clarity on mobile), but it was a happy accident that compliment each other so well.

We have sprinkled Disney quotes throughout the Friendliest.app. Some you will find on pages, like Technology:

We're always exploring and experimenting. We call it Imagineering - the blending of creative and imagination with technical know-how. - Walt Disney

Others are hidden a little deeper...

With each major update, we hide at least one new Easter egg somewhere in the app. There are already a handful scattered around and more coming all the time. Happy hunting!